The excavations came about as the City and County of Cardiff planned to build a new interpretation centre at Cardiff Castle, with financial assistance from the Heritage Lottery Fund and the Wales Tourist Board. The design which was finally agreed involved building the new centre into the earth bank inside the wall which surrounds the castle, and this provided the opportunity for a full archaeological investigation of the area which was to be dug away. The excavations provided us with fascinating new insights into the history of one of Cardiff’s most prominent landmarks.

It has been known for a long time that, when the Normans built a castle in Cardiff at the end of the 11th century, they reused the site of a Roman fort (visit Past Excavations), however, the new excavations have revealed that the Romans were not the first to use the site. Under the Roman levels was a row of small holes, at least 15m long, which had been made by wooden stakes driven into the ground. There were also several pits and holes for wooden posts, which contained flint tools and sherds of pottery dating to the Bronze and Iron Ages. This is one of the most exciting discoveries from the whole excavation, since it shows that people were using the area that became Cardiff city centre well before the Roman army arrived, though unfortunately there is not enough evidence to show what they were doing.

There is also new information about the Romans themselves. The first fort, dating to the 1st century AD, was very much larger than all the later forts, probably extending north and east to the area now occupied by the law courts, and southwards into what is now Castle Street and Duke Street. One of its internal buildings was uncovered during the excavation. This was built of timber, and all that was left of it were the narrow slots which had been dug into the underlying soil, and the remains of some clay floors. From its ground-plan, it was possibly a barrack-block for soldiers stationed at Cardiff. There were also two small ovens, and evidence for the manufacture of glass and the working of lead, iron and bronze.

The excavation also investigated features dating to later phases of the fort. The bank around the castle was first put up as part of the fourth and last Roman fort, dating to the 3rd century AD, although it had been largely reconstructed in the 1920s. When a length of this was removed, it was found to overlie an earlier bank on the same alignment, which was interrupted to allow a road to pass through. What is particularly interesting is that there was no evidence for a gate to bar the road as it ran out between the two sections of bank. This suggests either that the bank was not intended as a serious defence, or if it had been, that it was never completed. The road has been resurfaced on at least one occasion, and had wheel-ruts cutting into it. It ran on a line which would have taken it northwards towards the gate of the second and third forts, which lay outside the area of the excavation.

Many Roman artefacts were found including several pairs of tweezers in a copper alloy, probably bronze, brooches in a similar alloy, and the decorated lid of a small stone box, possibly for cosmetics or ointments. The pottery on the site was both locally made and imported from both other parts of Britain and the continent, some of it stamped with the markers’ names. Among the coins were two very interesting groups or hoards. One, possibly originally in a box with iron fittings and found in the debris of a collapsed building, may have represented the savings of an individual who for some reason never came back for them. The other, in a pottery vessel consisted of eleven coins which ranged over several hundred years. As some would not have been legal tender when the hoard was deposited, this may have been a ‘coin collection’ in the modern sense.

No information was found to bridge the gap between the end of the Roman fort in the 4th century and the arrival of the Normans in the 11th century. After the castle was established, the area where the Roman bank had been was used for industrial processes and the disposal of rubbish. This means that there will have been no bank here in the medieval period: previously it had been believed that the medieval bank which covered the Roman wall extended nearly as far as the eastern side of the south gate. A small kiln with a cobbled base was found. There was also a latrine pit and the cess which it contained will be analysed and will hopefully provide us with information about the diet of the people using it. Because the area had been used to dispose of rubbish, which had been buried in a series of pits, there is a large collection of medieval artefacts including coins, objects of iron and bronze, decorated window glass, a glazed floor tile depicting a peacock, decorated bone gaming counters and a large amount of pottery. This included several pieces of a large jug made in South Wales in the 14th century and decorated with a ram’s head.

After the end of the Middle Ages, the area continued to be used for the disposal of rubbish. Two other cess pits, these ones lined with stone, were discovered and were found to have a lot of rubbish dumped into them, including lots of animal and fish bones, and majolica pottery imported from Italy or Holland, and stoneware from Germany. Another stone structure, probably the remains of a building, contained deposits of lime over the cobble floors of three of its compartments which had preserved wooden artefacts, including a small decorated knife with a wooden handle, possibly of 17th century date. Visit 2005-2006 Excavation page 2 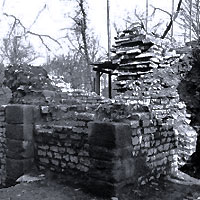 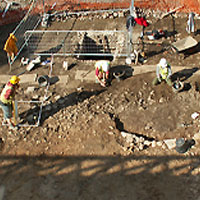 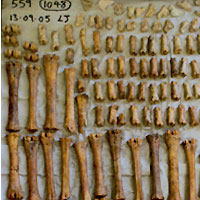 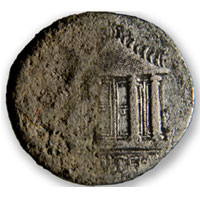